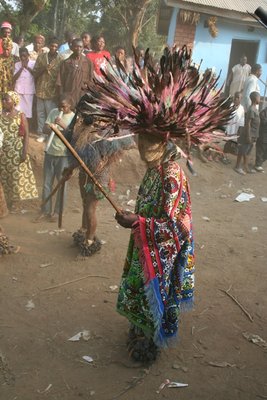 Too hot too work and my head hurts. I think I need to go and get a cold coca-cola.

There are only 3 bars in the village that does cold drinks and even if it meant walking to one of them I was determined to have a cold coca-cola.

It was 3pm and in front of me was a group of school girls in their blue shirts and brown skirts. As we approached the market, the girls suddenly started screaming and took refuge behind a car. Startled I peered around them to try ascertain the problem. But I couldn’t see anything, so I gingerly followed them.

Again more screaming and running behind vehicles. So I stopped a passer by and asked her:
“What is going on? Why are they frightened?”
“I don’t know”

Again I followed the girls. This time I caught up with them and as they started screaming and running around me, I stopped one and asked her
“What’s wrong?”
But she looked at me wild eyed and said nothing.

Then I saw the problem. Juju’s. 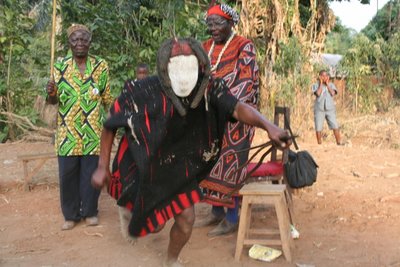 There were two juju’s ahead of us. They were crouching and between them was a man. They wore long dresses of feathers. Their faces were covered with a white cloth and on their head was a wooden mask. Each carried spears.

Thinking quickly I crossed the road in an attempt to walk past them without catching attention. From the corner of my eye I noticed one of them pointing a spear at me, but I averted my face and pretended to not notice. I took refuge in a shop and peered out from the doorway.

As the two Juju’s walked away, I did a quick look round the store but not seeing anything I wanted, I stepped out to continue on my way.

But the screaming children and running past me, made me step back. And when I saw the Juju wearing the grass skirt, with the big black mask on its head, carrying the black batons and with ropes held by two men tied to its waste, I gasped “Nkor” and ran into the store. 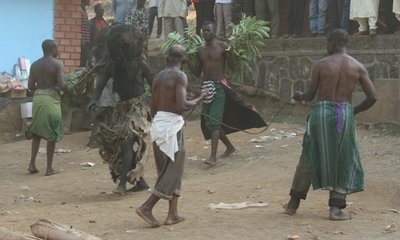 “My goodness! Why is Nkor out?” I asked the store keepers.
They shrugged. They didn’t know.
One other customer came and stood beside me and expressed her annoyance.
“They shouldn’t come out in to the day like this and disrupt people.”

Another grass skirted Juju appeared behind Nkor. This time with a mask on its face. It walked to the Total station and stood towering over a man in a car. He could not move and the Juju would not move.

“Look at the way the Juju is chasing the children. It is not happy. Something has happened” The women beside me commented.

“What is going on? Why are the Juju’s out today?”
I asked for the third time.
“It’s the start of the festivities.”
“That’s not true. I have the calendar. The events started on the 6th of December and ends on the 30th of January. The next event is on the 7th of January. This isn’t on the schedule. What is going on?”
“I don’t know. It is December it is the time of the festivities. I don’t know” He shrugged. “Do you have things like this at home? Have you taken photographs? Are you frightened?”

Juju’s are part of the secret societies and are believed to be beings possessed by ancestral spirits. The face of the Juju is always covered, so one does not know the man behind the mask. The people of Bamunka believe that Juju’s do not talk and do not eat and have spiritual powers. Some of the more powerful Juju’s, if crossed can cause harm. (I was once told of a Juju whose shadow if crossed, will cause leprosy).

I waited until there were no children in sight before venturing out of the store, to resume my journey for my coca-cola. 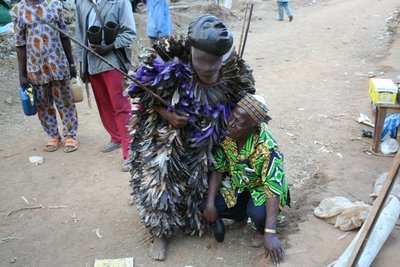 Posted by tamara_p 04:49 Archived in Cameroon

Previous Next Table of contents

This blog requires you to be a logged in member of Travellerspoint to place comments.

If you aren't a member of Travellerspoint yet, you can join for free.