The secret society of the King Makers 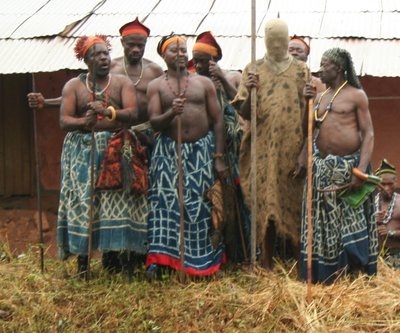 “Erik, where are we going? I need to go to Tangoh for the announcements from the King Makers”
“Can we stop in Baba? It is their market day”
“No. I cannot be late. I promise to come back to Baba on the next market day.”

Erik was the driver of a motor bike and Erik and I had been visiting rural schools in the neighbouring villages all morning. It had been raining and we were covered in mud and dust from head to foot. I was cold from the constant exposure to the rain, tired and sore from the long hours on the motorbike.

We slipped and slid though the mud roads and deep water mud puddles.
“Now I understand why you wore your Wellington boots”
Erik straddled the bike and paddled through a puddle with the water lapping over his ankles, pushing the bike through the puddle.
“Should I get down and walk? It may be faster?”
“No. Stay on the bike. Look, someone has fallen.”
We drove past two people picking up their motorbike.

Eventually we stopped at a small junction with a market place and a few palm wine bars. I looked around me and hesitated to climb off the bike.
“Is this it?”
“Yes”
“Are you sure?”
“Yes”

So I climbed off the bike and approached the men sitting in the nearby palm wine bar.
“Good afternoon”
“Good afternoon”
“Is this where the celebrations are meant to be taking place?”
“Yes”
“Am I late? Have I missed it?”
“No you are not late. It will start soon”

“Soon” could be anything from 10 minutes to 2 hours, so I shrugged and turned to Erik.
“OK. Thank you.”
“Shall I wait? We can wait 10 minutes and then go back.”
“No it is OK. I am going to stay for the entire event”
“Really? How will you get back?”
“I will find some transport”
“It is not that easy here”
“Don’t worry I will manage”
“Call me if you want me to come and collect you”
“OK”
“Bye”
“Bye”

So I sat at the palm wine bar, drank palm wine and waited. My neighbour turned to me.
“It is very unusual to see foreigners make the effort to come here to Tangoh and to sit with the locals”
I looked around me wondering how to get back to the centre of the village many miles away and understood why.
“Well I have been in Bamunka for almost 1 and a half years and this is the first time that I have been here.”
“Are you working in Bamunka?”
“Yes. At the computer place opposite the police post”
“That is great”
I sipped my palm wine and watched a car churn its way through the mud, deepening the already deep holes in the road. I watched the suspension of the over laden car bump precariously against the road and is it reared and rolled across the road. Now I understood the high number of vehicle break downs along the road.
“This road is really very bad.”
My neighbours agreed.
“You should come and fix it for us”
I stared at them in disbelief.
“What? Why don’t you fix it? I only help people who help themselves” 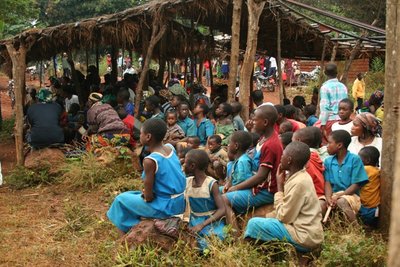 “Why are they called secret societies? They are not secret, I know who they are?”
“They are secret because you don’t know what they do. No-one knows apart from members of the society.”

The King Makers stood on the mound in the middle of the market. The juju stood amongst them. The Ngumba stood in a semi-circle behind them.

One of the King Makers stepped forward and made the first announcement. He spoke in the Bamunka dialect, which I do not speak, so I had to rely on summarised translations from a later date.
“Bush fires are banned.”
The other King Makers whispered to him, and he made the second announcement.
“Immoral behaviour and jay walking is banned.”
Between each announcement, the other king makers whispered in his ear.

Posted by tamara_p 03:01 Archived in Cameroon

Previous Next Table of contents

I stumbled across your blog, and it is fascinating! I am looking forward to any other observations you post in the future.

Thank you for sharing with the wider world.

I find the culture fascinating. It is the most exciting aspect of my stay here. And when you find something as interesting as this, there is only one thing to do - and that is to write about it

This blog requires you to be a logged in member of Travellerspoint to place comments.

If you aren't a member of Travellerspoint yet, you can join for free.